History of the Institute | ILERI

History of the Institute

ILERI was created in 1948. Its objective, in the aftermath of the Second World War, and the creation of the United Nations, was to train the first international civil servants. 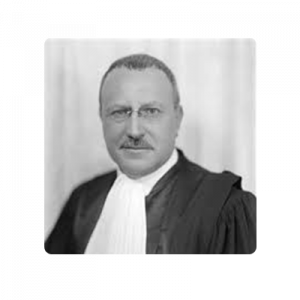 The Institut International d’Etudes et de Recherches Diplomatiques [International Institute of Diplomatic Studies and Research] was founded in the apartment/practice rooms of Albert de Geouffre de la Pradelle, the most prestigious professor of international law at the time.

Having been founded without financial resources or material support, the Institute’s team delivered its teaching in a teaching room that the Institut Catholique gave them to use free of charge. The first classes were given by a volunteer teaching body united in the French humanist spirit of the time. The teaching, which focused on international issues, took place over 3 years.

The prestige of Mr de Geouffre de la Pradelle, as well as the sponsorship of a number of prominent individuals enabled the Institut to expand, until the departure of its President in 1954.

The presidency of the Institute then passed to another jurist, René Cassin, co-author of the Universal Declaration of Human Rights and future Nobel Peace Prize winner 1968. Under his presidency, the teaching and number of students expanded. The Institute’s name changed to the “Institut Libre d’Etude des Relations Internationales” [Free Institute for the Study of International Relations]

Edgar Faure succeeded René Cassin in 1976 and re-structured the Institute so that it would follow the same routines and structures of the university and conferred upon it a new impetus. A new department of “Economics and International Commerce” was added to the international relations course programme, and the ILERI Diplôme d’Etude Supérieur (DES) [higher degree] award certified students’ completion of studies.

The work was continued in 1988, by his successor, Raymond Barre, a former minister, and then by Roger Burnel, president of the IGS.

A decade of change

ILERI implemented the changes of the LMD reform in the 2000s, developing its Bachelors degree in International Relations and its partnerships for the Masters degrees, in International Security and Defence, and in Economic Intelligence.

Antoine Sfeir, political scientist and journalist, assumed the presidency of ILERI in 2014 and continued its development through the continual adaptation of its teaching in line with contemporary issues, with a rich student experience, and an increasing level of internationalisation. He was president until October 2018.

The ILERI presidency passed to Jean-Dominique Giuliani in February 2019, President of the Robert Schuman Foundation and a specialist in European affairs.